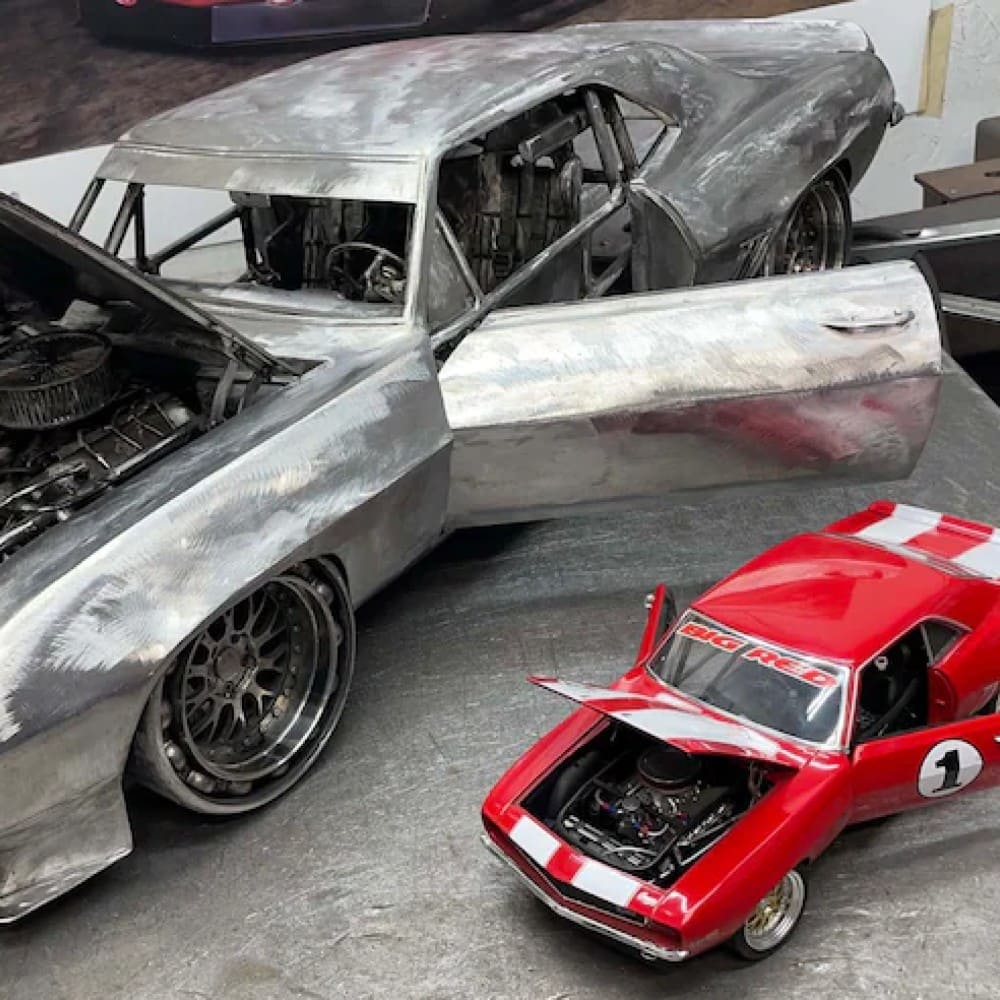 Model cars are not just kids’ toys anymore! Some people have an urge to collect miniature car models as prized possessions. That’s why the scaled-down version of actual hot rods has emerged as a lifestyle over the past few years. The craftsmanship behind these metal sculptures, with meticulous detailing, is nothing short of jaw-dropping. Jamie Schena, a 33-year-old builder, is an expert in hot-rodding handiwork and has recently proven this with his amazing take on the iconic Big Red, or the 1969 Chevy Camaro. 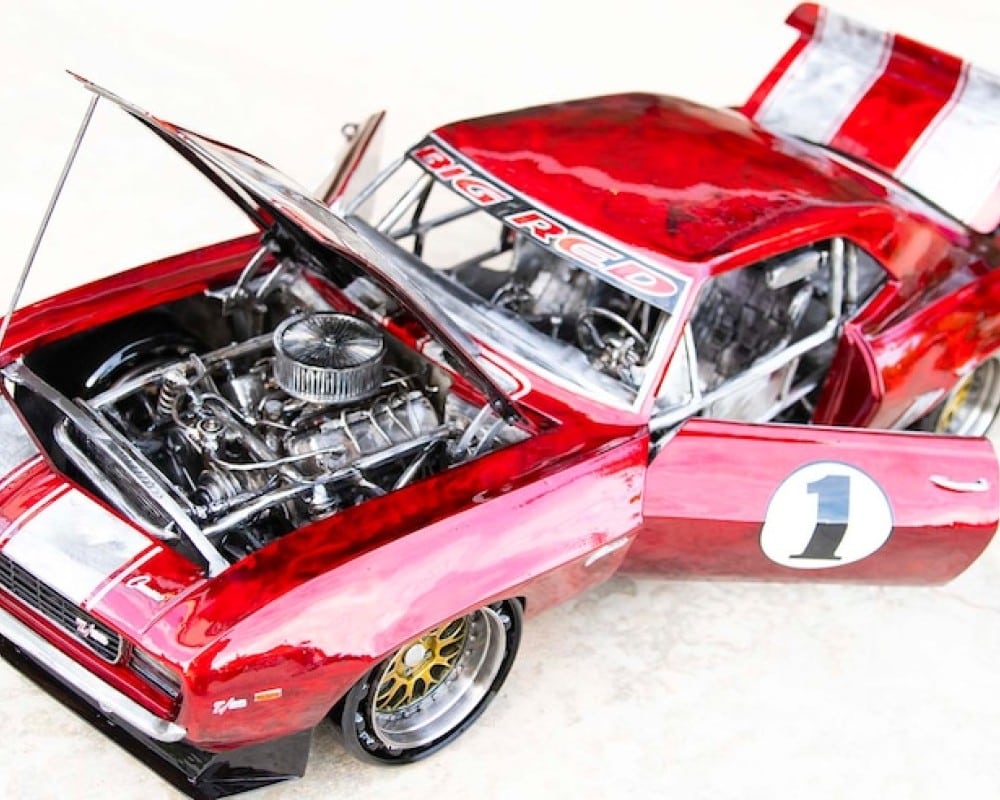 Jamie Schena started the project because none other than RJ Gottlieb, owner of Big Red, commissioned it. According to the talented craftsman, the Big Red Camaro road racing setup was, by far, the most complicated sculpture he had to build. His instructions were to build each detail of both the exterior and interior, along with the trunk, hood, and opening doors. There was no deadline and Schena was given full freedom with unlimited hours, as Gottlieb wanted this masterpiece to be his greatest sculpture yet, and the end result proves he was not disappointed.

For his most ambitious project, Jamie Schena went to Victorville, California to visit Big Red in person and to study the car components in particular. He was completely blown away by the skilled work of the Big Red crew, and at the same time, realized that it would be difficult to recreate this American icon by perfectly capturing its character. He paid attention to all the details of the Camaro, took extensive notes, and captured a lot of photos. As his artwork was not a die-cast model, only scaling down everything was not enough.

The Process of Recreation 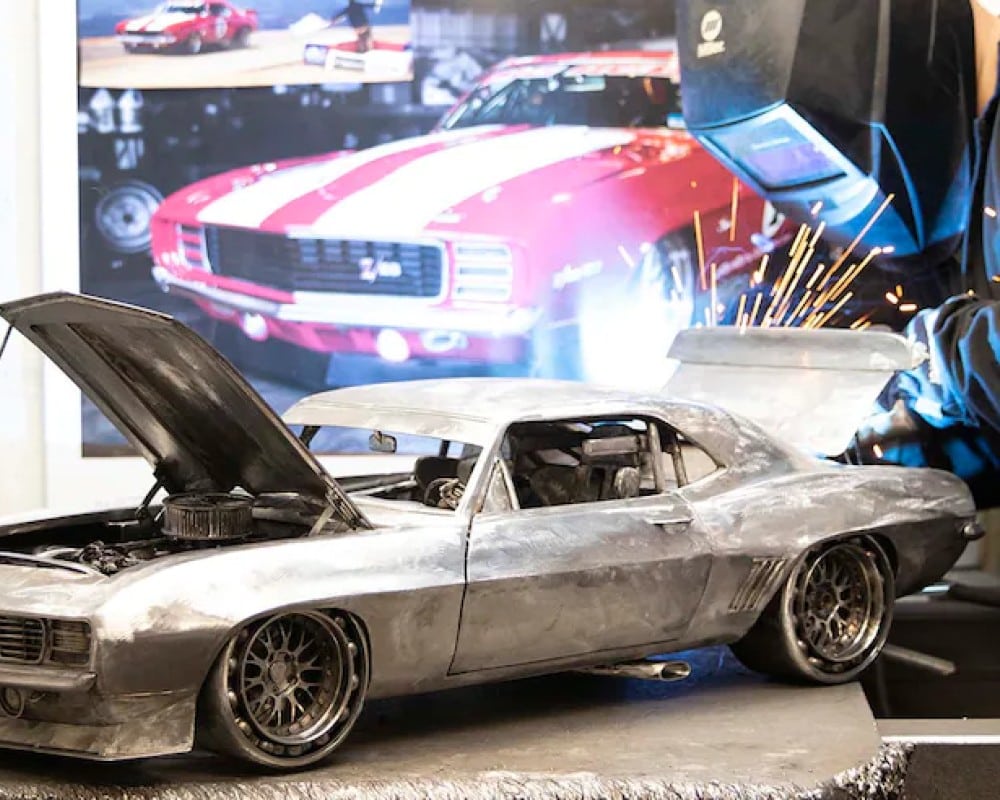 Jamie Schena built his Big Red Camaro sculpture from recycled automotive parts and mild steel sheet metal. This bespoke metal artwork is one-off and non-replicable. To celebrate the fact that it’s fully handmade, Schena left the metal grinding marks exposed. The replica is ¼ in scale and weighs 95 pounds. Starting from the minuscule bolts and hinges, to individual parts of the engine, to the fire system, he managed to capture every detail in this recreation. Lastly, he used polyurethane clear paint with an assortment of dyes for the paint job to generate the color of the original Big Red Camaro. But a transparent sheen was provided to the color to make the metal craftsmanship visible. Thus, after spending hundreds of hours alone in his studio, Jamie Schena came up with this true masterpiece of the Big Red Camaro sculpture.

F1 Is Considering Layout Changes for the Monaco Grand Prix

The latest Monaco Grand Prix featured just one overtake in 78 laps, which occurred during the ...